The Bollywood actor holds the audience spellbound with her solo performance, and poetic monologue. 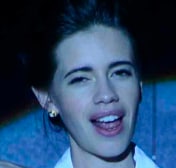 Kalki Koechlin defies every stereotype. Born to French parents in Puducherry, she has emerged as one of the leading lights of new cinema in India. A writer, actor and innovator, she has forged creative partnerships which are ensuring change in the old ways of seeing. She began in Bollywood as a latter-day Chandramukhi in Anurag Kashyap's critically acclaimed film Dev.D in 2009 and has never looked back. Kalki feels strongly about women's issues and in September 2013, her short video, titled It's Your Fault, for the Anti-Rape Campaign went viral on the Internet with over 150,000 views in just two days.