As chief minister of one of India’s most progressive states, S.M. Krishna does not allow the weight of his office to rob him of his other passions: playing tennis, designing men’s wear, reading and taking long walks. The former professor of international law entered the Karnataka Legislative Assembly for the first time in 1962. He made his debut in Parliament in 1968 and served as Union minister for industry and finance. In 1992, he became deputy chief minister of Karnataka and in 1999, the chief minister. He has been responsible for initiating major reforms in the state. 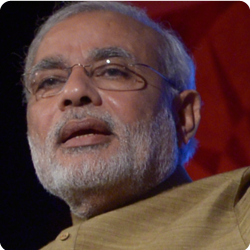 Narendra Modi became the Chief Minister of Gujarat for the first time in October 2001 and since then he has won three consecutive Assembly elections in the state. Seen as the driving force behind Gujarat's transformation as the most developing state in India with a dynamic business environment, Modi has emerged as the frontrunner as the prime ministerial candidate of India's main Opposition party, Bharatiya Janata Party. But the road ahead has many hurdles as political parties and some of his own party men are polarized over his role in the 2002 Gujarat riots and his allegedly autocratic style of functioning.