Will Kashmir's politicians choose governance over posturing and violence? Can there be a lasting settlement - and lasting peace? 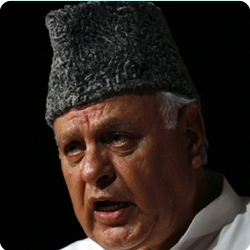 A former chief minister of Jammu & Kashmir, Farooq Abdullah has dominated the politics of the Valley for almost three decades. Currently a member of the Rajya Sabha, he carries forward the tradition of his great father Sheikh Abdullah. Without compromising on national interest, he stands for more political autonomy to the state that launched his political career. Arif Mohammed Khan has served as Deputy Minister of Information and Broadcasting; and Minister of State in the Ministries of Home Affairs, Agriculture, Energy, Industry, and Company Affairs. He was also Cabinet Minister in charge of Energy and Civil Aviation. Born in 1951, he was General Secretary (1972-73) and President (1973-74) of the students union of Aligarh Muslim University. He was elected to Uttar Pradesh Assembly in 1977. He was subsequently elected to Parliament as a member of the Lok Sabha four times. Syed Ali Shah Geelani is not known to mince words. He speaks openly about “the Indian “occupation” of Kashmir. The website of Tehreek-e-Hurriyat Jammu and Kashmir, of which he is chairman alongside leading the separatist alliance of All Parties Hurriyat Conference, lists its Srinagar headquarters as being in “Occupied Jammu Kashmir”.Born in 1929, he in the 1950s joined Jama’at-e-Islami, and has also won elections to the Jammu & Kashmir assembly on that ticket. He was thrice elected to the assembly. From 1987-89 he led the Muslim United Front coalition in the assembly.