Anna Hazare had galvanised the usually apathetic middle class onto the streets to protest against corruption, but did it work? 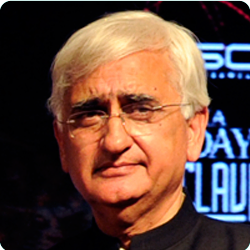 Salman Khurshid is the Union minister of law and minority affairs. Born in Aligarh in 1953, Mr Khurshid is a two-time Lok Sabha MP from Farrukhabad in Uttar Pradesh. He was Union minister of state (independent charge) for corporate affairs between 2009 and 2011 and Cabinet minister for water resources in 2011.He was educated at St. Stephen’s College, Delhi and St. Edmund Hall, Oxford University. A trained lawyer, he is an advocate in the Supreme Court. National VP of the People's Union for Civil Liberties

Binayak Sen is a paediatrician, public health physician and a civil rights activist. He has provided healthcare to the tribals of Chhattisgarh for over 25 years. A graduate of Christian Medical College, Vellore, Dr Sen is the national vice-president of the People’s Union for Civil Liberties.Hespent a long period of his detention in solitary confinement. His arrest, confinement and conviction provoked outrage among civil society activists in India and abroad. Prominent CPI(M) leader Brinda Karat was a Rajya Sabha MP from West Bengal between 2005 and 2011. In 2005, she became the first woman member of the CPI(M)’s politburo, the party’s top decision-making body. She is a leading voice for women’s rights in India. She is married to Prakash Karat, who is the general secretary of the CPI(M).Mrs Karat was educated at Welham Girls’ School, Dehradun and Miranda House, Delhi University. In 2005. Maleeha Lodhi is special adviser for international affairs to Pakistan’s largest media conglomerate, the Jang-Geo Group. She is a member of the council of the London-based International Institute of Strategic Studies and a member of the advisory board of the Middle East Centre at the London School of Economics. She is vice-chair of the Global Agenda Council on counterterrorism of the World Economic Forum.Dr Lodhi twice served as Pakistan’s ambassador to the US (1993-1996, 1999-2002) and as high commissioner to Britain (2003-2008). She served as a member of the UN Secretary-General’s Advisory Board on Disarmament Affairs from 2001 to 2005.