The goal is not to be the No. 1 source of cheap labour. India has the opportunity to develop into a world-class manufacturing sector: Thomas A. Stewart Before joining the Harvard Business Review, Thomas Stewart wrote a series of articles in Fortune in which he pioneered the concept of intellectual capital. It eventually led to his groundbreaking 1997 book, Intellectual Capital: The New Wealth of Organizations, which has been translated into 17 languages. FT Dynamo, the online forum of The Financial Times, has named him among the “Fifty Most Influential Management Thinkers”. He is also a fellow of the World Economic Forum. 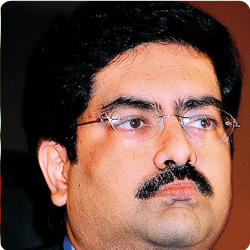 As chairman of the Aditya Birla Group, one of India’s largest business houses, 38-year-old Kumar Mangalam Birla is the youthful face of Brand India. Taking over the reins of the company at a young age, he has proved to be a worthy successor to his father, the late Aditya Birla. In 1998, Kumar Mangalam was the first industrialist to be appointed as a public nominee on the governing board of SEBI. The London Business School MBA is now back at his alma mater as an honorary fellow