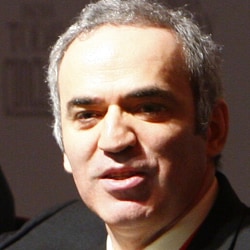 Garry Kasparov is widely considered the greatest chess player that ever lived. In 2005, Garry announced his retirement from competitive chess after 21 years as the No. 1 ranked player in the world. Garry became the World Junior Champion at the age of 16, and in 1985, became the youngest ever World Champion at age 22. He was the undefeated World Champion for 15 years, defending his title more than any other world champion in modern times. He has played several high-profile matches against supercomputer chess programmes.