Talking about success and the fame it brings, Khan said: "The spotlight can be a frightfully lonely place. But accepting the beauty and the gift that comes from being in the spotlight is the only way to go." He joked, "When people start throwing themselves at you, just make sure you always smell good, brush your teeth, have soft hair. I have a lot of ladies who like to smell me and grab me, so now I have lady bodyguards." 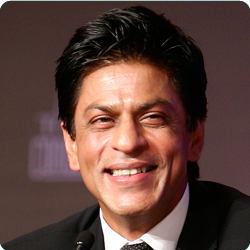 Shah Rukh Khan is more than a superstar. He is India's top entertainment phenomenon. Khan is among the most influential people in India's movie industry, and the promoter or co-promoter of several production companies engaged in movies, television and special effects. He is a sought-after television host, a frequent face for prestige and public service advertising, and one of India's unofficial cultural brand ambassadors.Born in 1965, Khan obtained a Masters degree in mass communication, with a specialisation in film-making from Jamia Milia Islamia University in Delhi. He debuted in Fauji, a TV serial, in 1988.