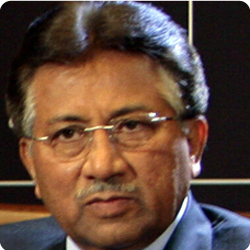 Former President of Pakistan, Pervez Musharraf held "the world's most dangerous job," according to TIME magazine. Twice he came within inches of assassination. His forces caught over 600 members of Al Qaeda in the mountains and cities, yet many others remain at large and active, including Osama bin Laden. A former commando, Musharraf rose through army ranks to reach the apex of one of the world's most populous Islamic states at a time of growing Muslim militancy. He restructured the political system by pushing for change at the grassroots level.